This weekend I launch yet another serial:  this time, with the help of my friend Luke Newman (creator of Smoke Jackson and the Sarge from Jumpgates).  This story doesn’t directly intersect with Jumpgates of Our Star, but is set in the same Dystopian universe, and was composed on the same message-board.

This is, as always, original work.  Newman and I wrote alternating chapters between October ’07 and April ’08, but life got in the way for both of us thereafter.  It is also still available on the Team-Dystopia forum page, with site registration.

Do not copy, republish, or sell this story, but by all means, you may repost the links to any of the stories here.  And enjoy!

Night time is always the worst.  This place is bad enough in broad daylight, but at night…well, he couldn’t find the words.  The city used to have a name, at one point.  It has long since been forgotten.  It was built to be a perfect world, a perfect society.  Now… well, now it is a strange twisted version of the founder’s dreams.  A Dystopian mockery of what was a grand ideal…a dark reflection of a pure concept.  Sure, the city grew…and grew…and grew.  Some say there is no end to it, a rumor that is scoffed at by those who live near the walls.  They say that a man may wander the city his whole life, and never see the whole thing.  From afar, she looks perfect…she looks as if the founder had realized his dream.  It is not until one gets inside; into the very heart of the city that it is evident…even this gem has its flaws.  And it is here, in this Dystopia that he survives…because one can hardly call existence here ‘living.’

It was raining, and that never helped.  He is in a bad enough mood at any given time, but when the rain falls there is no talking to him.  So it clearly wasn’t a good time to get the call.  He cursed under his breath as he raised his wrist and opened the com link.

“What is it?” he asked, and spat on the ground.  His eyes narrowed as the face on the wrist com looked at him disapprovingly.

“We’ve got one for ya’, Kriever,” she said with an almost bored tone in her voice.  She rolled her eyes and blew a bubble with her chewing gum.  He hated when she did that.  He hated almost everything about her, from her short spiky red hair, to all the piercings on her face.

“What is it this time?” he growled.  “Another toaster on the fritz?”

“You know Captain hates it when you call them that,” she sneered as she popped the bubble and lapped the gum back into her mouth.  He just stared at the screen.  “Yeah, alright?” She continued.  “It’s down near Feng’s.  Not far from…”

“I know where it is,” he grumbled and slapped the wrist com screen shut.

The street in front of Feng’s Noodle Shop was a bit quieter than it usually was at this hour.  It didn’t help that police holo tape had been put up and a body lay face down about ten feet from the counter.  Kriever could tell just by looking that Feng was not happy.  The alien shop owner was engaged in a conversation with one of the uniform boys…giving his statement about what he saw, or more likely didn’t see.  Kriever had managed to establish a relationship with Feng, a feat not common amongst those of his profession.  The problem with most officers of the “Law” was that they tried to bully Feng around, and probe into his private affairs.  Detective Kriever knew the value of staying hands off at times.

He turned his attention away from the shop.

“What do we have?” Krieger asked as he walked through the glowing yellow police line.

“Are we sure this one had an IAI?” Kriever looked at the metal heap as the rain splattered down around the scene.

“Most AA-423s did,” the tech answered.  “Made it easier for them to interact with organics.  We’re still trying to get confirmation.  The IAI registration office is having a ‘glitch’ in their system, so it’s taking a while.”

“Then why am I here?” Kriever snapped.  “I don’t do clean up jobs when someone caps a washing machine. I need to know if this thing was self aware.”

“Yes sir,” the tech answered.  “I just thought that if it was an IAI, then you could go ahead and get a start…I mean, with the rain and everything, you’re going to be short on time…right?”

“You do your job, and I’ll do mine,” the detective barked back to the tech.  He stood and walked around the scene.  He took in the position of the body, the location of the damage, and the angles of approach from the alley adjacent to Feng’s as well as lines of sight from the buildings above.  For all the complaining he did, he was one of the best there was.

A sound caught his attention.  He turned and squinted, trying to locate the origin of the noise.  It was no use, as the rain began to fall heavier by the second.  He shook his head and pulled his coat tighter around his shoulders.  He turned back toward the noodle shop.  Feng had finished with his statement and had floated back into place behind the counter.  Kriever stepped up to the bar and leaned against it, trying to get as much of his head out of the rain as possible.

“What’s the word, Feng,” he asked the alien as it hovered back and forth, stirring this pot…mixing that…and making a small mess with each new section of the eatery to which he flitted.

“I just told the blue boy I ain’t seen nothing,” he mumbled as he dropped a heaping spoonful of some green spice into one of the boiling pots.  “You eating tonight?”

“It probably headed uptown,” Feng answered without looking up.  “You need some of this or not?”

Kriever looked over his shoulder at the crime scene.  He turned back to the chef inside the restaraunt.

“Your funeral, pal,” Feng grumbled, still not turning away from his bubbling concoctions.  Kriever always found the alien fascinating.  A tall slender man approached the large window.  He stared at the crime scene in front of the restaurant for a moment then turned his attention back to his own business. The detective looked him up and down.  Pilot.  He could tell. Off world transit, most likely a long hauler.  It was the long skinny limbs and frail looking frame.  Extended periods of Zero G tended to have that effect on a body.

“Where ya headin’?” Feng called from inside.

“Kalisto Seven,” the pilot answered.  “Wanna get one for the road.”

“Kalisto?” Feng called with a false tone of awe.  “This oughta do.”

He handed the pilot a cup of his ‘special blend’ and turned back into the kitchen.

“Thirty-two,” He added over his shoulder.

The pilot dropped the credits down on the counter and walked away.

“I told you already…uptown,” Feng answered. “Sure you ain’t eating?”

“Suit yourself,” the alien replied and threw himself back into his cooking.

For the first time all night, Kriever grinned.  With a slight huff and slap on he counter he turned back to the rainy street in front of Feng’s.  It took him only a couple of steps before he was back inside the police line.  He bent down over the twisted metal body on the ground, and then looked up.

Thanks to Mr. Luke Newman for permission to post his parts of the story as well as mine.  Let us know how we did in the comments!

Hand this 'round to your friends and foes:

An American, artist, writer, reader, husband, father, but fundamentally a man and a Christian. View all posts by J. J. Griffing

Who has seen these worlds?

Books I am Reading 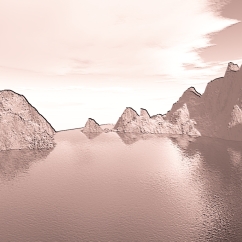 The Waterfall at the Edge 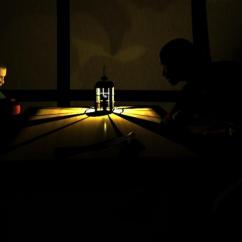 The Night Before the Battle

Sylvan September – The Courtship of Pan 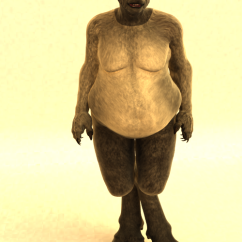 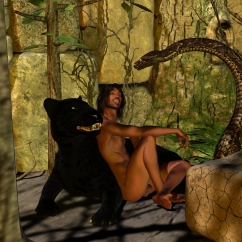 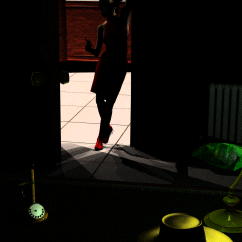 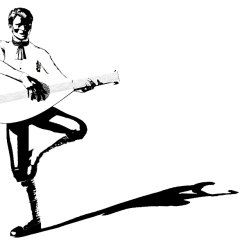 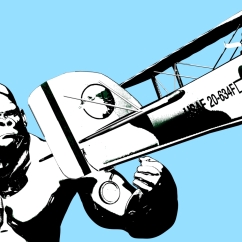 The Seige Perilous was Found Again 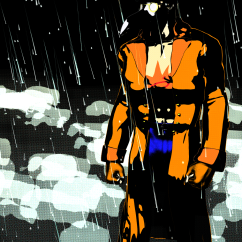 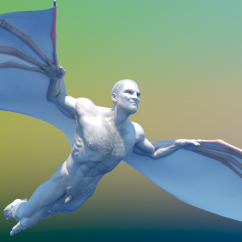 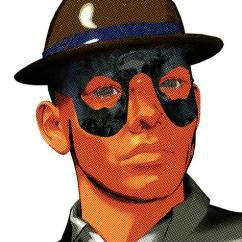 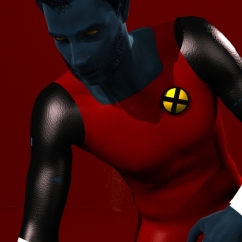 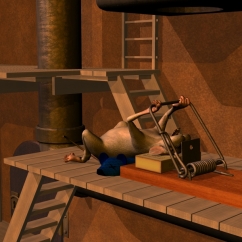 Biceps to Die For 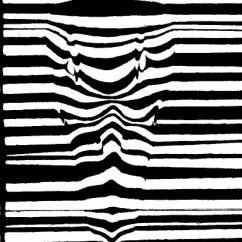 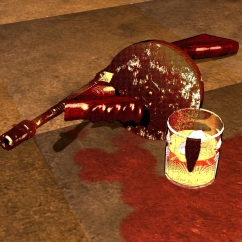 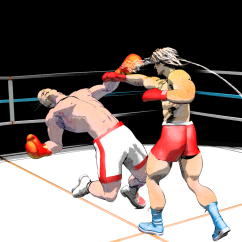 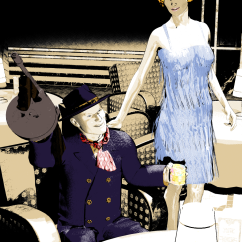 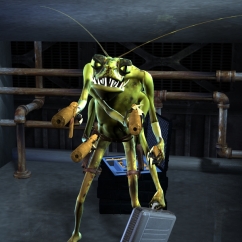 How many REMs to kill a cockroach? 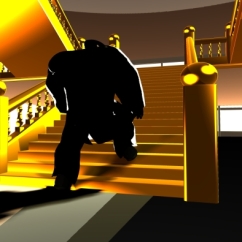 Storm over the Island 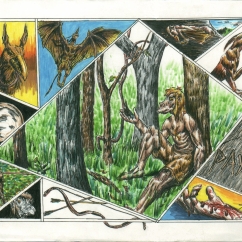 A Goblet of Red Glass 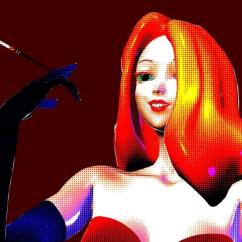 Monsters under the Bed: Bumping in the Night 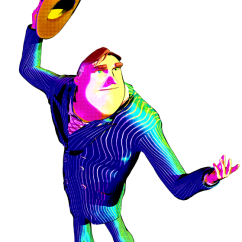 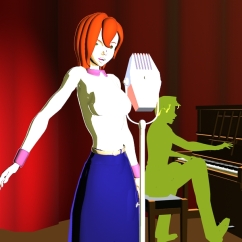 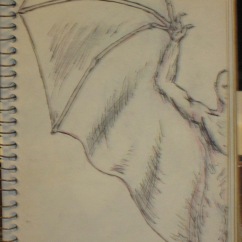 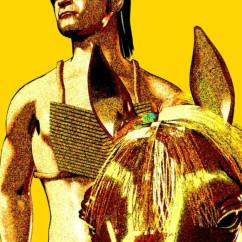 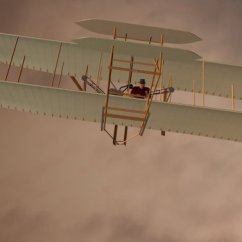 Build Your Own Wright Flyer!

The Eclectic Mind of an Author

Celebrating men - the image and glory of God.

Prove All Things; Hold Fast That Which is Good.

Making stuff from scratch in the wild

A Collection of Unmitigated Pedantry

A look at history and popular culture

The formation of a new denomination representing the continuing Church

Applying biblical truth to social, cultural, political, and theological issues in our world.

FORGET NONE OF HIS BENEFITS

Mindsets and methods for building and maintaining a masculine Frame

Poetry and prose by Ben Zwycky, author of Nobility Among Us and Beyond the Mist

A former sailor's ramblings on anything from family, country and Church through general geek-ness.

Breathing on the embers of a dying Republic.

thirtypiecesofsilverdotorg
Yard Sale of the Mind

The Price is Right